From July 20 to the end of September 2021, after more than 2 months of opening the first container rail transport route running directly to Belgium, departing from Yen Vien station (Vietnam), then forwarding containers by road. To the destination of Rotterdam (Netherlands), with a journey of 25-27 days, the railway industry transported about 230 40-foot containers on a container train to Europe.

The main goods on these specialized trains are textiles, leather and footwear for export, with the train journey to Zhengzhou (China) and connecting to the Central-European train to reach the destination.

A representative of Ratraco said that currently, the company is actively looking for sources of goods, coordinating with forwarding and logistics partners to organize a stable 1 trip/week of container trains running directly to Europe. After arriving at a station specializing in setting up Central-European trains in China such as Zhengzhou, Chongqing…, the container train will be coupled to this train to continue.

In addition, VNR also organizes container ships that run directly to Europe, but not in whole groups. Trains depart at Yen Vien station (Hanoi), go to China, depending on the destination in Europe, container trains are connected to different freight trains to different Central – European train stations to the destination. According to the orders and needs of passengers such as: Kazakhstan, Uzbekistan, Russia, Tajikistan, Poland, UK, Germany, Belgium… The main goods on these specialized trains are textiles, leather and footwear for export

In general, the export volume to Russia and Europe in the first nine months of 2021 is about 1,800 TEUs, with many electronic products from Hai Phong, Bac Ninh, Thai Nguyen; leather goods, textiles from Central and South.

Open up a new transport axis

Through this border gate, goods from Vietnam can be transported by rail to China’s localities, transiting China to Central Asia, West Asia, Europe and vice versa.

At the border gate of Lao Cai station, the Vietnamese railway connects the rail with the Chinese 1,000mm railway through the Lao Cai border gate (Vietnam) – Son Yeu station (Yunnan province, China). Through this border gate, goods on a 1,000mm gauge train from Vietnam to inland China can transfer to a car on a 1,435mm gauge train at Hekou Bac station to join the Chinese railway network to other provinces in China or transfer to the Central-Europe Express train (China-Europe Express) to go to Europe.

With the container railway, opening up a new transport axis for the Vietnam Railways industry, creating favorable conditions to encourage businesses along the railway transport route, because the Chinese side has a flexible pricing mechanism to collect revenue. suck many shipping items. While, in destinations in Central Asia, West Asia, and Europe, railways survive on goods in transit, creating preferential tariff policies. This will be a shipping opportunity for many Vietnamese exports to Europe at a reasonable cost and time. 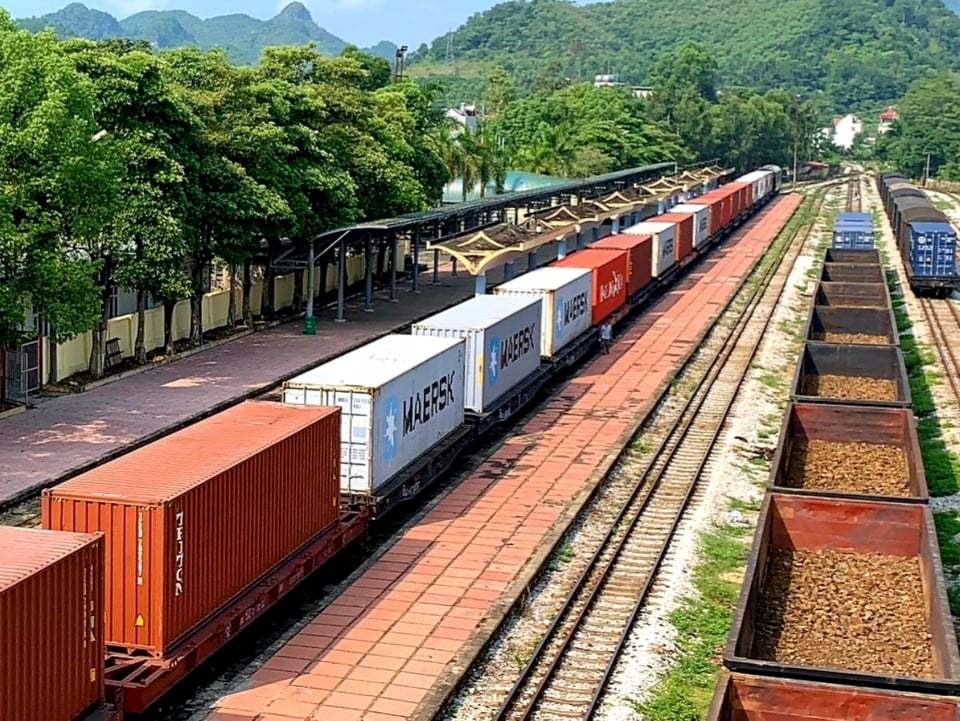 “In September 2021, Ratraco coordinated with NLS Company (China) to organize container trains Hanoi – Trung Khanh. The train opened with 23 containers carrying goods such as machinery, office equipment, textiles and garments, with a total value of about 2.26 million USD. According to the schedule, the train will arrive in Chongqing in 5 days. After arriving in Chongqing, the shipment will be forwarded and connected to the Asia-European container train for transportation to the center of Europe. After this train, the two sides continue to promote the exploitation of goods to transport by container trains departing every Wednesday and Sunday to China”, a representative of Ratraco informed.